I said in the last post I would write about what I used during the DK200, and I know it has been a little while so here it is.

I bought this bike to use for this race last year and instantly fell in love with it.  While the casseroll is really just a road bike, the steel frame is very forgiving and the only real downside is the limited clearance for big tires.  I have always been a little unsure about the range of the rear cassette but have always been able to ride all the big hills around home, so no real reason for change.  1x9 works good for me and especially with the downtube/friction shifter.  Keeping it simpler with less chance of problems with cables or shifters, bar end shifters would probably work just a little better since the downtube is a little difficult to get to with a frame bag.  I didn't know much about the schwalbe tires but since the tires I ran last year were discontinued I needed new tires. I had great luck with no flats this year despite some pretty rough crossings later in the race.  My bars were fine but next year I might try some woodchippers or at least double wrap to try to prevent the numbness and tingling that lasted nearly a week after the race this year.  Pedals are a personal preference, the ones I have came with the bike when I bought it and work fine so no reason to change.

Nutrition can make or break your race. This year mine made it, the cooler temperatures probably helped too.   Last year I know I didn't eat or drink near enough.  In preparation this year I tried to find foods that tasted good to me even during longer rides.  Crystal hooked me up this year by making me a homemade version of a tangle/frame bag for my hydration bladder and a custom "feedbag".  I know that without these two things I never would have made it.  I carried plenty of food in the feedbag and had the hydration bladder full of water and two to three bottles of gatorade or powerade on the bike/in jersey pockets.  Crystal freshened each of these or changed them out at each checkpoint.

What I ate at checkpoints:

First Checkpoint- Peanut Butter and honey on whole wheat flatbread sammies.
Second- ham/turkey/cheese sandwich
Third- two slices of pepperoni pizza
I ate dill pickle spears at every checkpoint and drank some of the juice. That may not sound appetizing, but is really good, seriously try it.  I also tried to drink at least one bike bottle of fluids while there.

Overall I felt like my nutrition was pretty well spot on. I tried to eat every 45 mins even if I didn't feel hungry. That wasn't too hard except for right after coming out of the checkpoints, but I did it anyway.  I probably didn't quite drink as much as I should have in the first leg, but never felt dehydrated and had clear urine for the majority of the race.  I tried to drink around every 15-20 minutes, but that is tough too. My advice would be eat before you are hungry and drink before you get thirsty or else it will be to late.  I have used electrolyte tabs in the past with good results, but had some pretty serious cramps at Cedar Cross in the spring.  I intended to use them at DK but forgot to pack them until during the third leg, and then still did not use them and had zero cramps. Water, stawberry-lemonade Powerade, and Glacer Frost Freeze Gatorade made up my fluids and seemed to work great as well.

A few other tidbits:  I brought spare shorts and jersey in case I wanted to change during the day. I did change into my heavier padded shorts at the halfway point.  Chamois Butter was used all day, very liberally with minimal chaffing/rawness.  I took some ibuprofen at the first and second checkpoint, mostly due to some stiffness/ pain in my back under my left shoulder blade. This eventually went away which was good since I only felt like I could get about half of a breath while it was there. As of today there aren't very many changes setup wise that I would change for next year.  Better bar tape, insulation for the hydration bladder, possibly bar end shifter or maybe even just go singlespeed. =)
Posted by Travis at 8:18 AM 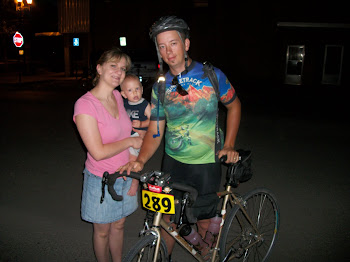 Crystal and Ethan with me before the start of the DK200. 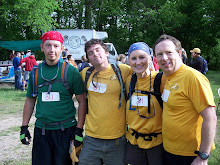 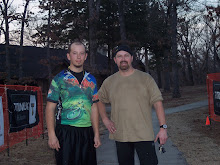 Chris and I at the finish of the Chill Feb. 09 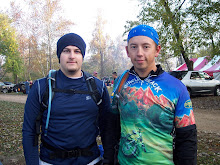 Sheldon and I before the Sand Springs Race 08.